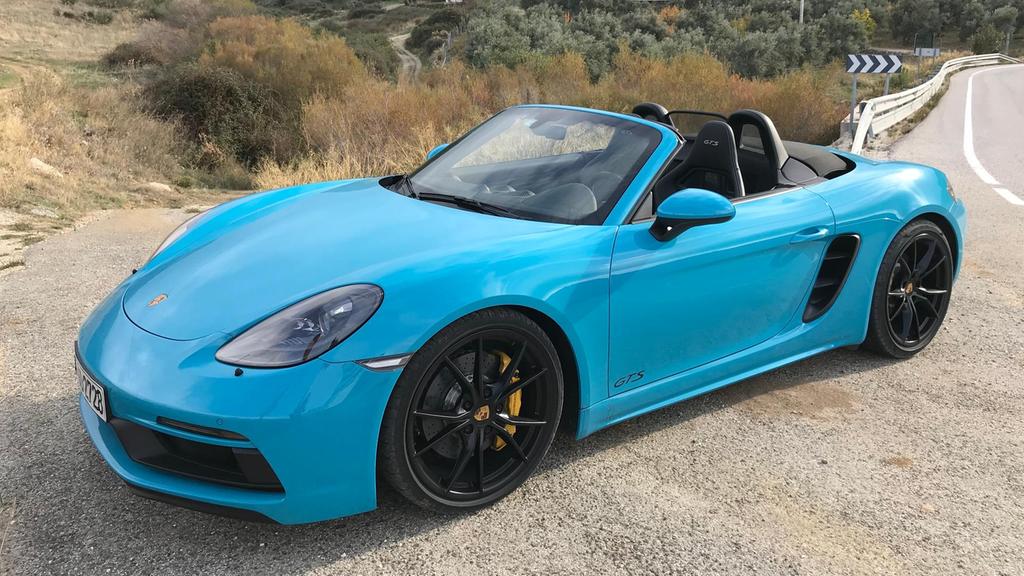 Dashing along a coastal highway in a white 911 Carrera 4 GTS Cabriolet – as I did in Cape Town towards the Cape of Good Hope this time last year – might sound like a recipe for proving the aforementioned stereotypes. In reality, it showcased just how much wind-in-the-hair enjoyment the famous veteran model still has to offer in its roof-off form.

But taking out a lava orange 2017 718 Cayman on the UAE’s roads this summer demonstrated just what the 911’s baby brother can achieve, as arguably the best top-on two-seater around for urban navigation. Now, however, I can trump all of that, because the GTS treatment has come to the 718 range (the coupe Cayman and soft-top Boxster). And a blast through the hills of Malaga province near the Ascari circuit and down to the Costa del Sol’s highways in a Miami blue – yeah, deal with it – manual Boxster GTS proves legitimately the most smile-inducing few hours imaginable on four wheels.

OK, so it’s full-electric range is still only a fairly unambitious 49km. In the picturesque Spanish bullfighting city of Ronda, though, my car, in an alien shade of off-white/grey apparently called “crayon”, looks almost otherworldly – luminous-green logos, brake callipers and all. Its new adaptable roof spoiler is window dressing for a car that can compete with some pretty serious rivals. Thought the Audi RS 5 was mean? The Porsche has five seconds on its compatriot’s 3.9-second 0-to-100kph time. Certain supercars might be shifting rather uncomfortably in their metaphorical seats at such rapidity.

Porsche has billed its Panamera range-topper as a “918 Spyder for the whole family”, and while it isn’t quite in hypercar territory, that claim doesn’t sound quite so silly when you consider that its hybrid power-train pushes out 680hp and 850Nm of torque. The latter figure soundly exceeds, to pick a random example, McLaren’s recently announced Senna, the British marque’s “most extreme” production car so far. Impressive stuff indeed.

In the city, the 718s have long had the edge over the 911s in terms of the cheap thrills of lane-hopping nipping between traffic. On the tight turns of the Sierra Blanca Mountains region, it is really much more of the same. Where the 911 would almost be wasting the upper reaches of its power outputs on these shift-happy roads, the Boxster GTS is a total joy to drop down a gear and feel the revs instantly swell. An automatic would take away all the grin-inducing impact; in this form, and in at this scale, it feels like an extension of your body – a pleasantly aural one, at that.

In numerical terms, that all means 365hp and 420Nm (the PDK auto gets an extra 10Nm) from the turbocharged 2.5L flat four, overtaking the previous highs of the 718 S models by double figures. Top speed? That will be 290kph from the comfort of your Alcantara-swathed cabin, should you not value your driving licence.

The previously almost friendly design of the Boxster has long since disappeared, with its rear in particularly looking more honed and menacing than ever. It has the visuals, vocals and velocity down pat, then. In the year that Porsche celebrates 70 years of selling production cars, it will be a tough opening act to beat.

Of course if you want to experience this kind of adventure for yourself be sure to check out our Porsche Rental in Spain page!

This site uses Akismet to reduce spam. Learn how your comment data is processed.